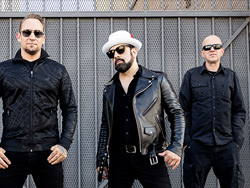 What do you do when you find out the guys behind Denmark’s largest concert (ever) are on tour and stopping in Las Vegas? You buy tickets, of course. Volbeat is bringing their Servant of the Road Tour with special guest Bad Wolves to Virgin Hotels Las Vegas and you aren’t going to want to miss it.

The year was 2001 and Danish rockers Volbeat took Copenhagen by storm. As opening acts for Metallica, Motorhead and Slipknot, they birthed six albums and received numerous awards. With hits like “A Warrior’s Call,” “Heaven Nor Hell” and “Room 24,” the band earned a Grammy nomination and crested the top 10 on Billobard Top 200’s list twice. That was something a Danish group hadn’t done on the American charts since 1997. Told you, you weren’t going to want to miss them live.