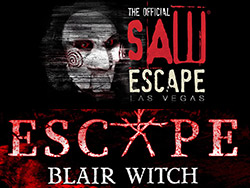 Okay, horror movie lovers, this terrifying experience is just for you. This bone-chilling escape room throws you right into the action of either the gory Saw franchise or the suspenseful Blair Witch movie.  Filled with live actors, immersive sets, and plenty of scares, the Official Saw Escape Room & Escape Blair Witch prides itself on bringing the frights for a full hour of mystery solving.  The SAW escape room recreates the infamous Jigsaw’s favorite traps, featuring multiple rooms where you’ll need to solve puzzles, crawl through small spaces in the dark, and ultimately find your way to freedom from inside one of the largest escape room experiences in the world. The story begins with an after-hours tour of the Egan & Co. Meat Packing Plant that quickly becomes a scene out of a nightmare when Jigsaw’s game begins. Do you have what it takes to make it out alive? Escape Blair Witch has your team exploring the Black Hills Forest on the hunt for clues about a few missing college students who were seen heading into the woods. You’ve heard the stories of the Blair Witch but are you a believer in the legend?