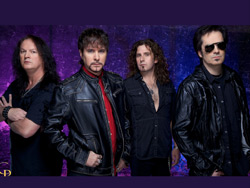 When did love become so “lame” to people? FireHouse is coming to The Westgate Las Vegas to teach people a thing or two about romance. It’s cool, okay! And we’re not just saying that because our mothers told us too.

They released their first self-titled album in 1990, and boy, were they on fire. Get it? Because the band’s name is FireHouse. Never mind. Anyways, after the music hit the stands, you know back when CD-ROMs were a thing, they were nominated for Best New Hard Rock/Metal Band by the American Music Association. And they won the award, beating out Nirvana and Alice in Chains. Big deal? Amiright? And it’s all because they wrote about love, well maybe. From there, they kept releasing albums and became a huge deal in Asia. They even went on a few tours through Indonesia, Singapore, Thailand and Japan. Their big hits include, “Don’t Treat Me Bad,” “All she Wrote” and “When I Look into your Eyes.”

FireHouse is coming to The Westgate Las Vegas to show us a few things about romanticism. Cheap tickets are available now.