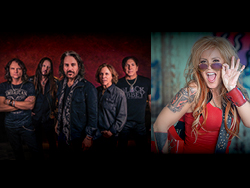 Gaining popularity in the 1980s, Winger combines elements of glam and progressive metal to create a unique sound that’s earned the band two platinum albums and a nomination for Best New Heavy Metal Band at the American Music Awards in 1990.

After disbanding in 1994 and reuniting in 2001, Winger created multiple new albums with their latest album, Better Days Comin’, which hit the Billboard Top 100 in 2014.

Lita Ford was the lead guitarist and one of the founding members of the legendary all-female rock band The Runaways. She stuck with the band throughout the 1970s before leaving to create a successful glam metal solo career throughout the 80s and 90s.

After taking a long hiatus from 1995 to 2008, she’s released two new albums and has toured all over.