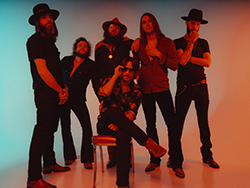 Whiskey Myers and their distinctive country sound are coming to Virgin Hotels Las Vegas as part of their extended Tornillo Tour, and you won’t want to miss your chance to see them live!

As part of the Red Dirt genre of country, Whiskey Myers pulls influence from all over the South, giving each of their tracks a slightly different flavor that ranges from toe-tapping honky tonk to the more earthy sounds of classic bluegrass which they always give their hard-rock edge to.

Billboard active rock, and No. 6 on the Billboard 200 charts. They were also featured on four episodes of the show Yellowstone in 2018. The band has been critically-acclaimed since their first albums release, with Rolling Stone noting that the band is “the seminal combination of twang and crunch rock & roll guitars that hits a perfect sweet spot.”