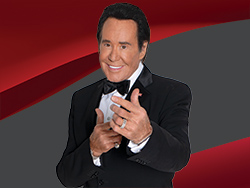 Wayne Newton is no stranger to the spotlight. He started performing in Vegas when he was just 15 years old. More than 50 years later, his star still shines on the Las Vegas Strip. His charm and endearing personality as an entertainer have earned him the moniker “Mr. Las Vegas.”

Newton’s show, “Up Close and Personal” at Caesars Palace, draws on his illustrious Vegas career, creating a unique experience as it showcases Newton’s hit songs, musical talents (He can play 13 different instruments!) and personal stories from decades of entertaining around the world.

You can definitely expect to hear Newton’s hit (and Wayniacs’ favorite song) “Danke Schoen.” But what we’re most excited about are Newton’s stories. Having performed more than 30,000 Las Vegas shows, Newton has seen Vegas transformed and has worked with everyone from the Rat Pack to The Killers. Combined with videos, his tales provide a unique and entertaining look at a legendary performer and the city he embraced.

A natural entertainer, Newton’s down-to-earth approach is why he’s the darling of Vegas entertainment. His enthusiasm always returns to the crowd tenfold, who live it up at every turn. Get your tickets to see Wayne Newton: Up Close and Personal at Caesars Palace today.