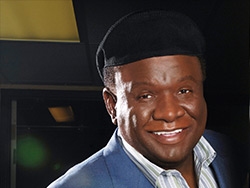 What’s the one random fact you like to tell people about your hometown? Because we guarantee George Wallace already knows it – and a few that you don’t. While it’s possible he might be a cyborg supercomputer disguised as a human, it’s probably more accurate that his comedic talents have helped him travel the world and experience these things.

If you know anything about comedy, you probably know how legendary George Wallace is. Not because he’s been doing it for so long (even though he’s been in the game since 1977), but because he’s still reinventing himself! Yeah, he’s been in movies and TV shows, has traveled the world numerous times and has all the comedic accolades one could ever dream of, but it’s his off-the-top creativity that makes him so unique. Anyone can memorize a joke, but not everyone can pull humor out of their **ahem** like Wallace can.

So when you’re watching the show and Wallace knows more about your town than you do, it’s not because he has a computer for a brain (which we cannot confirm nor deny), it’s because he’s a brainiac. So get your tickets today and get ready to HILARIOUSLY have your mind blown.