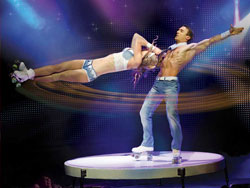 V – The Ultimate Variety Show is a performance beloved by both Vegas tourists and locals. This 75-minute show runs daily at the V Theater, Miracle Mile Shops at Planet Hollywood and it’s been highly popular on Strip for over 10 years. With some of the best and most unique entertainers, it definitely has something for every spectator and thus never fails to excite.

Created by a producer David Saxe, whose mom was a showgirl in Les Folies Bergere and whose father was a musician, this is an all-in-one live stage production featuring juggling, gymnastics, magic, skating, dancing and acrobatics, all spiced up with comedy (it’s often called “7 in one” in Vegas). This is a mix of acting and humor, a fast-moving and high-energy entertainment starring cast from around the world. Performers and acts slightly vary nightly creating an impression of the ever-changing performance. Some of the acts might look familiar as they were featured on America’s Got Talent and The Ellen DeGeneres Show.

Bring the entire family to the show and none of you will forget this spectacular evening soon! Choose between a general admission seating, a VIP seating featuring best view options, or a Special dinner + ticket package that includes VIP seating and a prix fixe dinner at either the Rainforest Café or the PBR Rockbar & Grill.