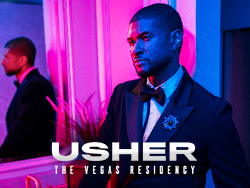 He’s one of the smoothest R&B singers to ever hit superstardom, and now he’s coming to Sin City for his brand new residency at Park MGM.

Usher has had tons of Top 10 hits throughout his career, won 8 Grammy Awards, and even broke a Guinness World Record in 2010 for having the most #1 R&B hits in the United States.

Usher’s immersive show incorporates audience interaction and unique staging throughout the 5,200-seat entertainment venue that’ll give every guest an up-close-and-personal experience. This Sin City exclusive spectacular is packed with an extensive list of smash hits that span the global megastar’s 20-year career, including some of his new music.

Get your tickets now to check out Usher when he comes to Las Vegas for his unforgettable new residency.