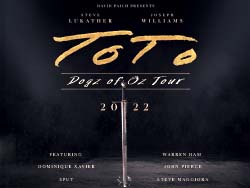 They may be known for blessing the rains in Africa, but it’s time for Toto to bless Las Vegas with their Dogz of Oz Tour for one night only at Virgin Hotels on February 25, 2022, at 8 p.m.

Formed in 1977, Toto’s long career has earned the band several Grammy’s and a spot in the Musicians Hall of Fame in 2009.

They reached superstardom when their fourth studio album earned them their first Billboard Hot 100 top hit Africa, closely followed by their song Rosanna at the number two spot.

After 14 studio albums and a few short hiatus’s lead guitarist Steve Lukather and lead vocalist Joseph Williams are back on tour with a new band lineup for their Dogz of Oz Tour. You won’t want to miss your chance to hear all of your classic favorites and a few new hits when Toto hits the Las Vegas stage on February 25, 2022, at Virgin Hotels.