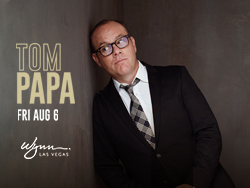 Starting as a radioman, Tom Papa’s hilarious antics have grown exponentially during his 20-year career to now permeate every style of media you can imagine. This comedian has written two books, appeared on late-night tv shows and podcasts like The Joe Rogan Experience, and guest-starred in multiple comedy shows on TV.

This superstar funnyman has had stand-up specials on both Netflix and Comedy Central, and he currently hosts a podcast with Netflix called “Breaking Bread with Tom Papa.” This podcast allows him to sits down with a wide variety of visitors to eat good food and have insightful and hilarious conversations.

Tom Papa has also been a featured writer and voice actor on multiple animated films such as Jerry Seinfeld’s “A Bee Movie” and the raunchy Rob Zombie film “The Haunted World of El Superbeasto.”

So if you want a night of hilarity and fun, you won’t want to miss Tom Papa when he takes the stage at the Encore Theatre on July 30th at 8 p.m.