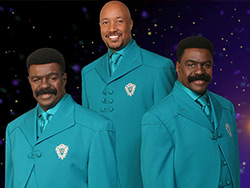 Formed by brothers Walter and Wallace Scott, The Whispers burst onto the R&B scene in 1964 with the single “I Was Born When You Kissed Me.” The band earned a strong fan following with its novel selling point: twin lead vocalists. Together, with disco star Evelyn “Champagne” King, they’re bringing their smooth vocals to The Cannery.

In 1969, the group cracked the soul charts with “The Time Has Come” and the R&B Top 10 the following year with “Seems Like I Gotta Do Wrong.” It topped the R&B charts with the single “And the Beat Goes On” in 1980 and had another No. 1 urban-contemporary hit with “Rock Steady,” in 1987.

The Whispers are one of the few remaining “old school” groups that has been in the business for more than 0 years and still has its original members. Their career highlights include seven gold albums, two platinum albums, 12 Top 20 singles, 40 charted hits since 1970, Grammy nominations, Soul Train Award nominations, and American Music Award nominations.