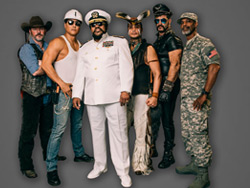 Young men in the Navy who may or may not be described as macho, pay attention. And, everyone who doesn’t fit into that rather narrow paradigm should listen up too. The Village People, Taste of Honey and Donna Summer Tribute Experience are all coming to The Cannery and everybody is going to be dancing.

The Village People is bringing their one-of-a-kind presence and presentation, along with their long list of hits including “In The Navy,” and “Y.M.C.A.” to Las Vegas for a show that’s sure to be all kinds of disco-tastic. You might be a fan from years ago, you might be a fan who’s found them via the internet and now can’t stop watching the video for “Sex Over the Phone,” but no matter who you are, you’re going to have a good time.

But the disco doesn’t stop there. A Taste of Honey is bringing the heat with smash single “Boogie Oogie Oogie” that hit No. 1 on the International Pop, Disco and R&B charts. That hit crossed generations and the globe, earning them multiple Grammy nominations.

Together with Rainere Martin, whose performing arts background and command of her stirring voice, earned her a standing ovation on “Showtime At The Apollo.” This will be one night you won’t forget. Cheap tickets to The Village People, Taste of Honey & Donna Summer Tribute are available now.