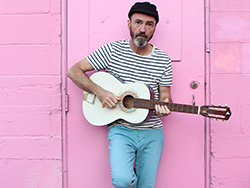 Indie rock band The Shins are celebrating the anniversary of their debut album “Oh, Inverted World” with their 21st Birthday Tour with a stop at Virgin Hotels Las Vegas for a night of emotional, melodic music that reshaped the indie rock genre forever.

Formed in 1996 by musician James Mercer, The Shins began as a side project that quickly became his main focus and biggest success. The Shins feature Mercer as lead vocalist and the sole lyricist, making him the only continuous member since its inception.

Their second single, “New Slang,” is what brought this small, independent band into the limelight. It was used for a McDonald’s commercial during the 2002 Olympics and was featured in the film Garden State starring Natalie Portman, whose character said the song would “change your life.”

This Grammy-nominated band continues to push the boundaries of the indie rock genre while preserving their romantic, emotional ideals within each note.