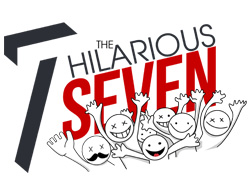 Hey! *Snaps fingers* Yeah, you! If you’ve got a short attention span like us, *squirrel!* Sorry, as we were saying, if it’s hard for you to sit down and watch a show, you’re going to love The Hilarious Seven inside Alexis Park.

We’re not sure if it’s just because we’re getting older or because social media has us all zonked out of the membrane, but it’s hard to keep our attention these days. That’s where The Hilarious Seven comes in. Hosted by comedian John Hilder, this show features seven different comedians performing ten-minute sets. No slow build ups, no awkward transitions, just straight to the gusto hilarity. It’s a blast.

Cheap tickets for The Hilarious Seven inside Alexis Park are available now.