Home / The Guess Who 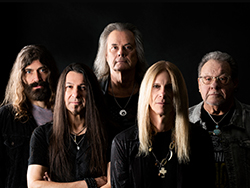 These aren’t the type of oysters you’d find at a restaurant. And for the last time, you’re not signing up for a cult. Blue Öyster Cult, or BÖC, is bringing hard rock and heavy metal to Downtown Las Vegas on February 25, 2022 at the Golden Nugget.

Sometimes you end up at the right place at the right time, and that’s how these Long Island New Yorkers came together to form the powerhouse band. After gaining ground, the band was featured on MTV (you know back in the day when it actually played music). Their most famous hits include “Godzilla,” “(Don’t Fear) The Reaper” and “Burnin’ for You.” With song names like that, you know they’re gonna give audiences a killer show.

Polish your heavy metal gear and make sure those spikes are extra sharp. This band is ready to rock the stage, and your world, for one night in Downtown Las Vegas.