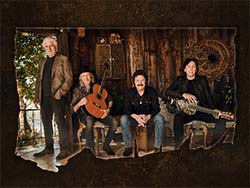 There’s family that you’re stuck with and family that you choose. Lucky for us, The Doobie Brothers chose each other and made acoustic sounds and melodies that are out of this world.

The Northern California band got their start in 1969, and the rest was history. They wanted a different sound than those who came before them and boy did they succeed. Not only did they make it big, but they took their triumphs and toured the world, spreading their good vibes and awesome music.

Over the years they came out with hits like “Listen to the Music,” “Long Train Runnin’” and “What a Fool Believes.” These sweet harmonizers went onto win four Grammy Awards and sold more than 48 million records worldwide.

When you’re in harmony like this band is, it’s hard not to become brothers. Get your Las Vegas concert tickets to The Doobie Brothers at the Zappos Theater during select dates in May 2022.