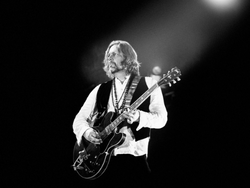 Coming off of a successful tour, The Black Crowes are making a stop at the The Pearl inside The Palms Hotel & Casino to rock the roof off of the place.

This band’s unique musical style is the perfect mix of ’90s rock with a distinctly Southern blues flavor that’ll have you both head-banging and body-swaying along to every song.

Starting in 1990, The Black Crowes emerged when rock n’ roll was on the decline as hair metal rose in the charts, The Black Crowes were a breath of fresh air, and their double platinum first record “Shake Your Money Maker” was proof of their popularity.

With over 35-million records sold since their debut, this was the most stereotypical rock band of the era, which included massive sold-out shows, eight studio albums, four live recordings, as well as the traditional unsavory rocker behavior.

The Black Crowes were kicked off a ZZ Top tour for insulting the sponsor and broke up multiple times, with the final straw being in 2013 when the band’s two dueling brothers vowed to never speak another word to each other again.

That is until 2020 when the band reunited to celebrate the 30th anniversary of their best-selling breakout album. So grab your tickets for this history-making tour today!