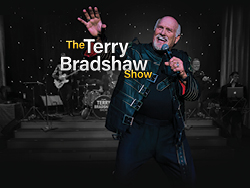 Football fans are familiar with the anthem, “Are you ready for some football?!” But the question we’re asking now is, are you ready for some Terry?! Hall of famer and legendary commentator Terry Bradshaw is bringing his unique charm, melodic singing and incredible storytelling to Luxor Las Vegas on select dates in August 2021.

If you’re a football fan, you know Terry Bradshaw. A four-time Super Bowl winning quarterback for the Pittsburg Steelers, Bradshaw is a Hall of Fame inductee, a beloved broadcaster and perhaps most notably, made a cameo opposite Burt Reynolds in the 1980 film, Smokey and the Bandit II. All jokes aside, there’s a reason why he has his own Vegas show: the man has talent. The kind of talent that’d make comedians and world-renowned singers jealous. Not just that, being a Super Bowl-winning quarterback for one of America’s favorite teams is bound to bring a few stories along with it -and we can’t wait to hear ‘em.