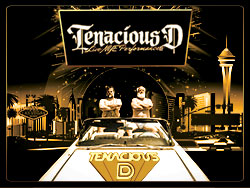 Sure, Jack Black and Kyle Gass are noted funny guys. But don’t get it twisted. When they step on stage, they ROCK. Like, hard. And that’s what their band, Tenacious D is going to do when they hit the Vegas stage for a special New Year’s Eve concert at Virgin Hotels Las Vegas.

For some reason, people tend to think that Tenacious D was some side project that Jack Black started once he got his big break in Hollywood. Oh boy, is that wrong. Meeting at a theatre company in 1986, Black and Kyle Gass bonded over a mutual love of the guitar and the rest, as they say, is rock history. Since those humble beginnings, tunes like “Tribute,” “Beelzeboss” and “Kickapoo” have become cult classics. And shoot, these guys have even starred in their own movie –“Tenacious D in The Pick of Destiny,” heard of it?

Get ready to pump your sign of the horns in the air all night long, because Tenacious D is going to rock your socks off.