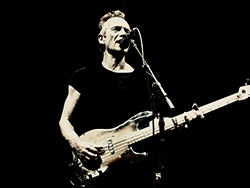 Give us a time and place, and we’ll gladly walk through fields of gold with Sting. We’re not gold diggers, we just like nice things. There’s no better way to spend an evening then watching a legendary rocker, Sting.

Damn Gina this man has stamina, the kind we like to see. He’s been on the music scene since 1976, and has secured his place in music history. Sting got his start with bands like The Police, The Newcastle Big Band and The Phoenix Jazzmen, and began his solo career in 1985. Since then, he’s gone on to release “The Dream of the Blue Turtles” and his most recent album “Live in Berlin.”

Build up your strength now; it’s going to be one long and tantalizing night with Sting.