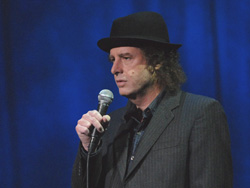 Known for his deadpan delivery, Steven Wright’s uncanny revelations about day-to-day life have put him at the top of the comedy court.

Usually when you imagine a monotone person, you get flashbacks of that horrible middle school teacher you never liked. But when you add the quality to a stand-up comic like Steven Wright, it’s pure gold.

If you don’t believe us, here’s a roll call on how successful he is. Wright has appeared as a host on “Saturday Night Live” and made appearances on talk shows hosted by Johnny Carson, Jay Leno, Craig Ferguson and David Letterman. In 2007, he released a follow-up to the successful album “I Have a Pony” titled “I Still Have a Pony,” which was nominated for a Grammy Award for Best Comedy Album. In 2008 he became the first inductee into the Boston Comedy Hall of Fame. AND…pause for a deep breath. Wright has been named the No. 23 comedian on Comedy Central’s list of the 100 greatest stand-up comedians of all time.

He’s got the Midas touch, not like that fake pawn shop stuff that will leave you with a green ring around your neck. So watch out Vegas, because these laughs are worth their weight in gold.