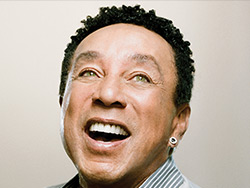 Smokey Robinson is a national treasure that should be cherished until the end of time. So, when we heard that he was coming to Encore at Wynn Las Vegas on September 18 – 21, 2019 at 8 p.m, we had a mini-heart attack.

Robinson has been on the music block way longer than Jenny. But because he is near and dear to us, we won’t reveal his age by telling you how long he’s been hanging around the Detroit neighborhood. All we’re sayin’ is there’s a reason why he won the Grammy Living Legend award and besties with the late, great Aretha Franklin. Just know, that in his time, he has amassed 4,000 songs to his credit. That includes songs he sang, produced and wrote. Most of them you would know from The Temptations, The Miracles, Marvin Gaye and more. A few songs you would recognize are “My Girl,” “The Tracks of my Tears” and “Cruisin’.” And since most of his songs have been #1 hits, he’s been inducted into the Rock ‘n’ Roll Hall of Fame and the Songwriters Hall of Fame.

Smokey Robinson puts the leg in legendary. Cheap tickets to his show inside Encore at Wynn Las Vegas on September 18 -21, 2019 at 8 p.m. are available now.