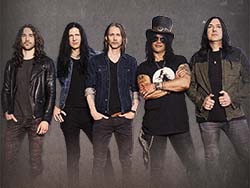 This rock n’ roll Hall of Fame inductee has been creating killer guitar riffs for decades, and his newest tour featuring Myles Kennedy and The Conspirators is ready to blow the roof off of the Las Vegas Virgin Hotels theater.

Beginning his rise to stardom as the lead guitarist for the legendary rock band Guns N’ Roses, Slash reached international acclaim for his guitar solos on hits like Sweet Child O’ Mine before leaving the group and going out on his own. He created two bands during the late ’90s and early 2000s, one was a blues cover band called Slash’s Blues Balls, and the other was considered his most successful comeback project, Velvet Revolver.

This current tour features the same backup band that Slash worked with on three of his previous solo albums, Myles Kennedy and The Conspirators. Myles Kennedy, the lead vocalist, has performed with some of the most iconic bands of all time, even filling in for Axl Rose when he refused to perform at the Rock N’ Roll Hall of Fame induction ceremony for Guns N’ Roses.

You won’t want to miss rock legend Slash when he comes to Vegas on February 19, 2022, so get your tickets today!