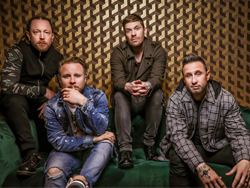 What seems to qualify as “rock music” has changed a bit over the years. But Shinedown is here to remind us what the phrase really means when they hit the Vegas stage.

Like we said, rock music comes in many forms, but this band likes to rock the opposite of how we like our math tests: hard. Shinedown have placed 11 number one singles on the Billboard Rock chart, including “45,” “Sound of Sadness” and Simple Man.”

So how do you define “rock music?” Shinedown would probably define it as “success.” Or getting punched in the mouth. Depending on the day, we suppose.