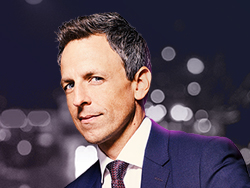 Seth Meyers stole our hearts the minute he stepped onto the “Saturday Night Live” stage and continues to steal it with his late-night show. His quick-witted humor and quirky personality will make you laugh like there’s no tomorrow. As an anchor on Weekend Update and lead writer for SNL, he’s won three Writers Guild of America awards and has been nominated eight times for an Emmy, scoring one.