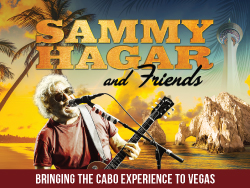 After his sold-out concert series in 2021, Sammy Hagar has decided to celebrate Cabo Wabo’s birthday bash in Las Vegas with a his brand new concert experience, Sammy Hagar & Friends Featuring WABOS, at The STRAT.

Known for hard rock music and beachy vibes, The Red Rocker has been a superstar since the 1970s, even replacing David Lee Roth as the lead singer of Van Halen in 1985. His time with the multi-platinum band earned him a spot in the Rock and Roll Hall of Fame when Van Halen was added in 2007.

Hagar has barely slowed down since, creating multiple new bands and successful solo albums throughout his career. Sammy Hagar also branched into a new business with the creation of his Cabo Wabo brand of tequila and restaurants.

Don’t miss Sammy Hagar & Friends Featuring WABOS when they rocks out at The STRAT, and get your tickets today!