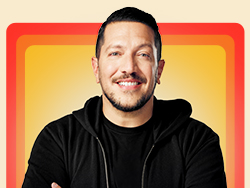 Known for his witty improv and repping Staten Island, Sal Vulcano is bringing on the laughs at Virgin Hotels Las Vegas.

Vulcano is a member of The Tenderloins, a comedy troupe along with long-time friends Joe Gatto, James Murray and Brian Quinn. Together, the troupe stars in the long-running TV show “Impractical Jokers,” where the foursome pulls some outrageous comedic pranks on unsuspecting people. Since 2011, the series has made viewers squirm double over with laughter while Vulcano and the cast dare each other to interact with guests without letting them in on the joke. They compete against each other to see who can stay in it the longest without cracking up and at the end of each episode, the joker with the most thumbs down receives a punishment determined by the winning jokers.

The Tenderloins won a $100,000 grand prize in 2007 for NBC’s “It’s Your Show” competition for their comedy sketch, “Time Thugs.”  In 2020, the foursome will be staring in their first feature film, “Impractical Jokers: The Movie.” Oh, how far the Staten Island high school friends have come.

The show will sure to be filled with laugh-out-loud comedy.