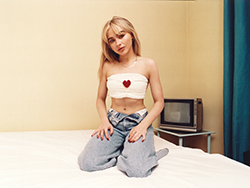 She may have started her career on the Disney Channel in Girl Meets World, but her career has grown exponentially since then. She’s released five studio albums, with her latest being named one of the best albums of 2022 by Rolling Stones and Billboard. She also recently starred in “Emergency,” which premiered at the 2022 Sundance Film Festival.