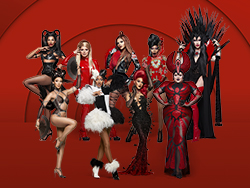 Clock the hair, clock the mug, clock the nails, clock my skirt, it’s time to werk. Glue your wigs on real tight, because this ruveal will leave you gagging. RuPaul’s Drag Race Live is getting its own show inside Flamingo Las Vegas. So start your engines, because this is going to be one sickening affair.

RuPaul’s Drag Race alums and winners will touch down on the Las Vegas stage for a fully-immersive show. Aquaria, Asia O’Hara, Coco Montrese, Derrick Barry, Eureka O’Hara, India Ferrah, Kahanna Montrese, Kameron Michaels, Kim Chi, Naomi Smalls, Shannel and Yvie Oddly will make you scream “yaaaaas queen” and thwoorp your fan a hundred times over. These queens on the scene will deliver shady-lady comedy schticks, lip sync assassinations and reveals upon reveals upon reveals. Everything will be left out on the stage, and by the end of it, you’ll be snapping and screaming “10s, 10s, 10s – 10s across the board.”

The goopery and gaggery is here Dahling. Zip up that dress, press on those nails and get ready to see these squirrelfriends death drop up and down the stage.