Home / Puppetry of the Penis 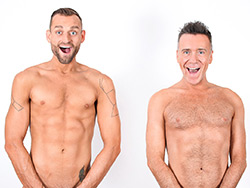 Remember when arts and crafts consisted of folding paper into cootie catchers and paper planes? Well now, “Puppetry of the Penis” finally puts all those days of origami practice to good use as the show’s skilled performers have moved on from paper… to their penises.

To get to the nuts and bolts of it, be ready to see some Willies, Johnsons, Peter Peckers, if you will… aka these guys will be performing in nothing but tennis shoes… and it’s really damn funny.

Masters of penis origami, the show’s two hilarious stars awe and shock audiences by folding, twisting, bulging and scooping their junk into creations such as “The Pelican,” “The Windsurfer,” “The Eiffel Tower,” “The Loch Ness Monster” and their signature creation, “The Hamburger.” These ballsy penis puppeteers flaunt it all for the sake of raw entertainment.