Home / Primus: A Tribute to Kings 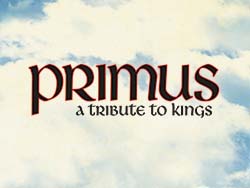 A metal show unlike any other, Primus is pulling out all the stops for their “Tribute to Kings” tour, all in the name of paying homage to one of the greatest bands in metal history, Rush.

The funk metal band Primus has been tearing it up since the ’80s with their signature psychedelic polka sound, and yes, that is how frontman Les Claypool describes them.

They’ve influenced dozens of bands throughout their career and have even gone platinum twice. Now they’re paying that success forward by showing love to the band that inspired them by playing through Rush’s entire “Farewell to Kings” album, as well as throwing in some of their own songs.

What’s that? Not enough awesome for you? Well, the show’s opener is none other than the heavy-hitting Wolfmother, so you know this is going to be the metal show of all metal shows.

Wolfmother began in 2004 in Australia where their self-titled debut album reached No. 3 on the domestic charts and has sold over 1.5 million copies worldwide. Their classic 80’s metal style has skyrocketed the band into stardome with one album even going platinum five times.

Catch Primus: A Tribute to Kings featuring Wolfmother at the Virgin Hotels Las Vegas on June 25, 2022.