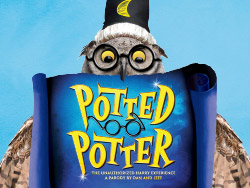 Not sure if you’ve noticed, but there’s been a small, teeny, tiny book series floating around for a few years. Actually, they’ve even turned that book series into a few movies, too. Ever heard of Potted Potter – All 7 Harry Potter Books in 70 Minutes? Well, Potted Potter inside Bally’s Las Vegas is a hilarious attempt to condense the entire series into one showing. This is one challenge you’ll want to see!

Obviously, we’re crackin’ jokes over here, because if you haven’t heard of Harry Potter (one of the world’s largest entertainment phenomena’s, BTW), you’ve literally been frozen inside a time capsule for about, oh, 20 BLEEPING YEARS! It’s everywhere! Books, movies, theme parks, t-shirts, bouncy balls, literally EVERYWHERE. Whether you’re new to the series or you’re a Potter head, you’re going to love Potted Potter. Get ready to laugh your quidditch sticks off as the show’s characters try to recreate all seven books in about seventy minutes. Created by two-time Olivier Award-nominated actors Daniel Clarkson and Jefferson Turner, this is a horcrux of comedy with ridiculous props, costumes and even a fire-breathing dragon. You won’t want to miss it.