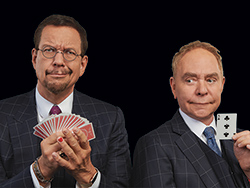 For multiple times Penn and Teller won “Las Vegas Magicians of the Year”. Breaking all the magic rules, the amazing magicians show hilarious illusions where classic tricks are performed in a whole new way. Creative, innovative, and very entertaining, Penn and Teller impress audience with jokes and tricks. While tall Penn serves as an orator, commenting on everything that duo does at stage, Teller remains completely quiet during the show. Penn and Teller immerse their audience in humor doing both classic illusions like bullet catch, and telling their magic secrets to spectators.

One of the friendliest shows on the strip, PENN & TELLER has wonderful reviews from thankful visitors from all over the world. The show is always in high demand, don’t miss it, book your tickets now!