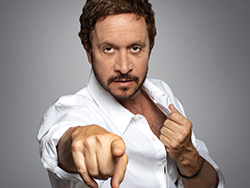 Star comedian Pauly Shore is coming to Las Vegas to showcase his stand-up comedy chops at the Tropicana’s Laugh Factory.

Pauly Shore is what you would call a jack of all trades among the masters of comedy, and he excels in nearly every project he gets his hands on.

Starting with his 1990 MTV show “Totally Pauly” that ran for six years, he shot into the big leagues with his HBO special “Pauly Does Vegas.” He then began his lineup of film appearances in slapstick comedies like “Jury Duty,” “Son in Law,” and “Encino Man.” As well as giving a voice to the cheese-wiz-loving Bobby in Disney’s “A Goofy Movie” and “An Extremely Goofy Movie.”

Pauly Shore has produced many of his own projects as well, including a documentary called “Pauly Shore Stands Alone” that followed his stand-up tour through multiple obscure Wisconsin towns, a video podcast called “Pauly Shore’s Random Rants,” as well as many others that featured other superstar comedians like Larry King and Andy Dick.

You won’t want to miss this connoisseur of comedy when he comes through Sin City, so grab your tickets for his performances today!