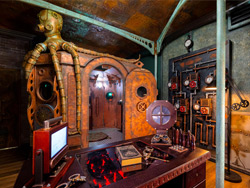 PanIQ’s escape rooms aim to make each guest’s experience as immersive as possible, which is why each room is perfectly decorated in an array of design aesthetics with a fully fleshed-out story to go along with your 45-minute adventure. They also have a full-service lounge with plenty of themed cocktails to get you in the mood before your escape room adventure begins. For just a taste of what to expect, here’s a breakdown of their escape room stories for you to dive into.  The Time Machine –  Expert Level (Recommended for Escape Room Veterans) Set in the steam-powered alternate history of 1892, a genius inventor’s radical ideas for the future have made him an outcast of his beloved city, turning him to madness, crime, and violence before mysteriously disappearing. He has left behind only a strange recording for you and your team to decipher. It’s up to you to investigate the professor’s work to discover what he was planning and where he’s gone.  Atlantis Rising – Expert Level (Recommended for Escape Room Veterans) You and your team of expert archeologists have been handed the opportunity of a lifetime when the Lost City of Atlantis rises back to the surface once more. Your crew has only 45 minutes total to get through the antichamber and gain access to the ancient city where you’ll solve multiple puzzles using your skills and some serious hand-eye coordination to uncover its hidden treasure before it sinks back into the deep.  The Haunted Manor – Hard Level Age 12 and up Enter one of the world’s most haunted locations, Vesper Manor, where local legends tell of supernatural horrors that lurk behind every door. The new caretakers of the property have hired your team of paranormal investigators to uncover the manor’s secrets and end the ghostly experiences once and for all.  Wizard Trials – Hard Level A world of magic unfolds before you as an apprentice for the greatest wizard in the world. You and your fellow apprentices have worked tirelessly for years to master the magician’s secrets, from his alchemical arts to the ability to transmute you’ve conquered them all. Now he’s given you 45 minutes to pass his final test: to find his missing familiar Mikla the cat before time runs out.  Zombie Outbreak – Medium Level Age 18+  The horde is here, and they’re hungry. Your gang of survivors have found an abandoned ranch as a refuge, but it won’t be safe for long. The old radio you were lucky enough to find speaks of a safe zone close by that can keep you all alive indefinitely. All you need to get to safety is to make the old motorcycle in the barn work again. So get that bike up and running as fast as you can. Because the dead are coming, and you can’t outrun them forever.  Casino Heist – Medium Level Age 8 and up The world’s most prolific thief has a proposition for you, but it’s not going to be easy. To leave Las Vegas with the score of a lifetime, you and your team must break into the vault at the Venetian Hotel Casino. You’ve got 45 minutes to find the vault, crack the code, make your way through a laser maze, and blow the vault doors to claim your prize before you’re discovered. Do you have what it takes to return home with the dough? The Morning After – Easy Level Age 18+ So maybe you had one too many martini’s last night, and you can’t really remember what happened, but it can’t be that bad, right? Wrong. You and your friends may have partied a little too hard, broken a few laws, and unfortunately got it all captured on the most incriminating video ever. So to save yourself a divorce and some serious jail time, you’ll have to break into the hotel’s security office and delete that footage before anyone else sees it. Otherwise, the consequences could be dire.