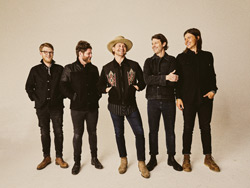 NEEDTOBREATHE is making a stop at the Venetian Las Vegas on their brand new acoustic tour, and you won’t want to miss your chance to see them play live and unplugged.

NEEDTOBREATHE has been creating its unique Christian Rock sound since the late ’90s, and their latest album, Into the Mystery, is one of their most critically acclaimed yet.

This album debuted in the Top 10 of multiple Billboard Charts and has earned praise from publications like Rolling Stones, Billboard, People, and American Songwriter.

At the 2021 CMT Awards, they performed the album’s hit single, “I Wanna Remember,” alongside the legendary Carrie Underwood.

The band also released a documentary about the album that chronicles their time recording while quarantined inside a historic house in rural Tennessee called “NEEDTOBREATHE: Into the Mystery.”

So get your tickets today to check out NEEDTOBREATHE when they perform all of their hits on this fantastic acoustic tour inside the Venetian Las Vegas.