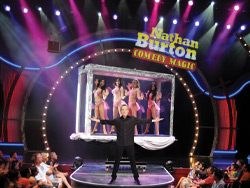 Nathan performed in a variety of Las Vegas shows including Showgirls of Magic and V – The Ultimate Variety Show, and others. But in 2006 he finally introduced Nathan Burton Comedy Magic show. Originally opened at the Aladdin Hotel & Casino, the show relocated to the world-famous Flamingo showroom in 2008, and then in 2012 finally found its today’s home at the Saxe Theater in the Planet Hollywood Hotel & Casino’s Miracle Mile Shops.

Come see Nathan’s comedy magic show at Saxe Theater at Miracle Mile Shops and enjoy the performance created by one of the most demanded magicians of the globe!