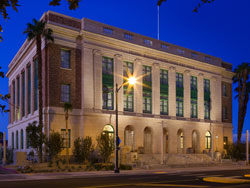 Located in the heart of downtown Las Vegas on Stewart Avenue and Third Street (right by Main Street Station), The Mob Museum is an interactive attraction showcasing the history of these famed gangsters. Here you’ll get an inside look at organized crime’s impact not only in Las Vegas, but its influence in America and the world.

Some find mobsters strangely fascinating, while others get excited about the good guys who brought them to their demise. If you’re into the law enforcement side, you’ll get a chance to read a lot about them, too.

One of the key exhibits is the actual courtroom used in the Kefauver hearings, the first mob-related event to be televised. The museum is located inside the former federal courthouse where the 1950-51 Kefauver Committee hearings were held. The Kefauver Committee investigation contributed to the national debate on organized crime that developed after World War II.

The dimly-lit courtroom shows historical clips on a big screen and just outside, you can read more about the hearings.

More law enforcement exhibits include a wire-tapping station where you can listen in on actual conversations that happened. See testimonies of FBI agents on audio-visual panel (AVP) screens and even try your aim with an FBI firearms training simulator. There’s also a police lineup booth where visitors can step into and be “suspects.”

The museum’s most valuable artifact is the brick wall from Chicago’s Valentine’s Day Massacre in 1929. The museum explains the murder of seven Moran gang members led by Al Capone’s South Side Italian gang. The wall includes a 38-caliber Colt Detective special revolver, the only gun directly related to the shooting. This gun is believed to have belonged to Moran gang member, Frank Gusenberg.

For those into the glitz and glamour of the mob portrayed in Hollywood, the Mob Museum has you covered. Take a seat in one of the comfy booths in a posh and swanky theater room and see all your favorite clips from various gangster movies.

Speaking of swanky, take the basement stairs back in time to immerse yourself in The Underground. This Prohibition-era world, surrounded by artifacts from the 1920s, allows you to experience Prohibition-era cocktails in an authentic speakeasy. Feel free to tour the on-site distillery for a taste of the past.

Built in the 1920s, the restored courthouse is one of the city’s last remaining historical buildings. The attraction cost approximately $42 million to construct.

This museum is culturally friendly by offering audio tours in seven languages, and for all of you out of towners who want to go in a big group of 10 or more, you can get special discounts on guided tour.