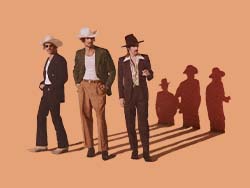 If you’re looking to get a little extra hyped before the concert, you can check out their podcast, “Set it Straight: Myths and Legends,” which uncovers the truth behind infamous stories of country music history with notable guests including Sheryl Crow, Matthew McConaughey, Garth Brooks, and Wynona Judd.

So grab your tickets today because you won’t want to miss Midland when they hit the Virgin Hotels Las Vegas stage!