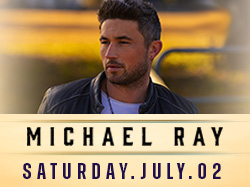 Michael Ray’s love of music may have started with watching his grandfather perform on a rural Florida stage, but his career has taken him to much greater heights in the four years since his debut on the country music scene.

You can hear his newly released single, Whiskey and Rain, along with plenty of his other hit songs live when he comes to the AZILO Ultra Pool at the Sahara Las Vegas for a night of poolside country music.