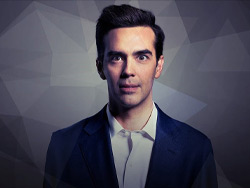 The Carbonaro Effect sounds a lot like the food coma that comes after scarfing down pasta for hours on end. But, upon further investigation, it’s a magic show featuring Michael Carbonaro. Now, this might sound disappointing because pasta is life, but this show is quite the opposite. Michael Carbonaro Live! is the afternoon pick me up everyone needs.

From guest starring in shows like “Greys Anatomy,” “30 Rock” and “CSI: Miami,” to having his own hit TV show on truTV called “The Carbonaro Effect,” Carbonaro’s tricks are a true gem in this world. With his wild antics and over-the-top personality, he makes magic truly believable. Carbonaro uses hilarious video clips, audience interaction and of course magic to make this show one of the best. We wouldn’t say it’s like going to Hogwarts with Harry Potter, but it’s close enough.

Michael Carbonaro is coming to Vegas to leave us all in a bewildered state of mind. And here we thought we could only feel this way after a night out in Vegas, guess not.