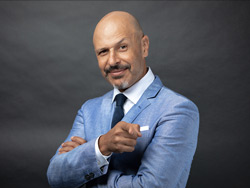 If you’ve been keeping up to date with the hottest shows on TV, you’ve probably already seen comedian Maz Jobrani in action.

His notable features include shows like Superior Donuts, Last Man Standing, and Grey’s Anatomy, to name just a few. He also starred in the indie film Jimmy Vestvood: Amerikan Hero.

If you’d like a sneak peek of his hilarious standup before you experience it live and in-person, Jobrani has multiple solo specials available on Showtime as well as his Netflix special inside the prestigious Kennedy Center.