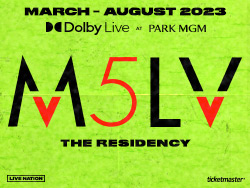 As one of the most iconic bands in pop music, Maroon 5 has been creating hits since their debut album in 2002. Since then, they’ve won three Grammy Awards and have sold over 90 million albums.

You won’t want to miss this Las Vegas residency that was custom-designed just for the Dolby Live stage, so get your tickets now!