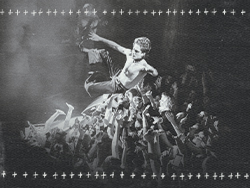 Måneskin brings their first-ever world tour to Sin City for one night only to rock the night away at Virgin Hotels Las Vegas.

The Loud Kids Tour brings the hit Italian four-piece band across the pond and into the limelight, away from their Roman roots. They’ve played at iconic festivals like Coachella, Rock in Rio, Pinkpop, and more, but this is their first official worldwide tour.

Considered a major player in the resurgence of rock around the globe, Måneskin has collected over 3 billion streams and has reached the #1 spot in multiple countries. They’ve been featured on Ellen, The Tonight Show, The Voice, Saturday Night Live, and the American Music Awards.

Hailed by the Los Angeles Times as “America’s New Favorite Rock Band,” Måneskin is fresh, sexy, and talented, making them a not-to-be-missed concert experience when they come through Virgin Hotels Las Vegas.