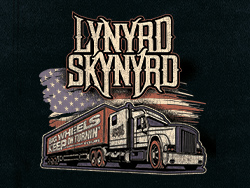 The legendary Southern rock band Lynyrd Skynyrd is coming to Virgin Hotels Las Vegas to rock through their multi-decade-long catalog of hits.

Considered the whiskey-soaked genre’s most influential crew, the band was listed in Rolling Stone Magazine as one of the “100 Greatest Artists of All Time” in 2004 and became part of the Rock and Roll Hall of Fame in 2005.

From Free Bird to Sweet Home Alabama, this is your chance to hear all of their iconic hits live.