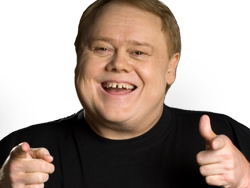 As one of the hottest comedians of the 1990s, funnyman Louie Anderson is a stand-up show you won’t want to miss.

After his network debut on The Tonight Show in 1985, Anderson’s comedy stylings are in multiple 80s films, including Coming to America, Ferris Beuller’s Day Off, and The Wrong Guys.

His multiple stand-up specials on Showtime increased his fanbase to where he became the host of Family Feud in 1999.

Louie Anderson isn’t just hilarious; he also has a charitable nature. He organized a week-long Family feud tournament event in 2001 to support the NYPD and the NYFD after 9/11 that raised $75,000 for the cause.

So whether you’re a fan of his film appearances, his stand-up chops, or both, you’ll want to book your tickets today to see comedy rockstar Louis Anderson at the Laugh Factory on May 8th and 9th.