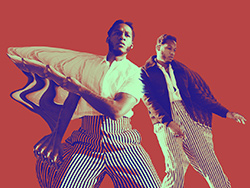 Leon Bridges has had six Grammy nominations during his career, earning a win for Best Traditional R&B Performance for his song “Bet Ain’t Worth the Hand.”

He hit the ground running in 2015 with his single “Coming Home,” which was a Top 10 Viral Track on Spotify. His debut album of the same name earned him his first Grammy nomination for Best R&B Album.

His songs can be heard in multiple films and television shows, and he’s collaborated with many other superstars throughout his career. His latest record, Texas Moon, is his second collaborative record, and it came out in February of this year.