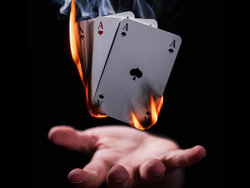 If you’re looking for an adults-only escape into the darker side of enchantment, Late Night Magic is the ultimate night on the town.

Your host for this evening of entertainment is the brilliant illusionist Douglas “Lefty” Leferovich, and the show features a rotating roster of distinguished magicians. A few of these well-known conjurers that you can expect are:

First, we have the lovely hypnotist Annarose, a staple at the Paris Las Vegas Hotel.

Next on the roster is the hilarious optical illusionist Bizzaro, who has performed on the Masters of Illusion show and frequents the illustrious Magic Castle in Hollywood, CA.

Another regular at the Magic Castle, the silky smooth sleight-of-hander MonDre has won multiple awards during his career, including being the only African American to win the Grand Prix Magiques de Monte Carlo.

Lastly, we have the macabre John Shaw who’s specialty is the infernal sideshow arts. He also performs inside the Zak Bagans’ Haunted Museum.

Late Night Magic performs on Friday and Saturday nights at 10:30 p.m. So book your tickets today for an evening of sexy, mesmerizing thrills.