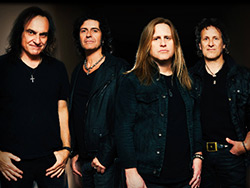 What do you do when some of heavy metal’s best musicians decide to get together? Well, when you’re Vinny Appice and Andrew Freeman, you call up some of your most talented musician friends and form the band, “Last In Line.” We’re glad they did, because now they’re going to rock the stage at Golden Nugget Las Vegas on September 13, 2019 at 8:00 p.m.

If you’re a Vinny Appice fan, chances are, you’re a Black Sabbath fan. And chances are, you’re probably wondering why he would walk away from being the drummer of Black freakin’ Sabbath?! There’s the money, the fame (ooooh the fame) and everything else that comes with being one of the biggest metal bands in the world. Well, we can’t say for sure why he left, but we’re glad the dude kept making music that keeps fans banging their heads. Singles like, “Devil in Me,” “Starmaker” and “Give up the Ghost” sprinkled among some of heavy metal’s greatest hits keep bringin’ the fans back.

So get the crew together, because Last In Line is going to take you back to metal’s golden era. Snag your discounted tickets for Last In Line inside Golden Nugget Las Vegas on September 13, 2019 at 8:00 p.m.